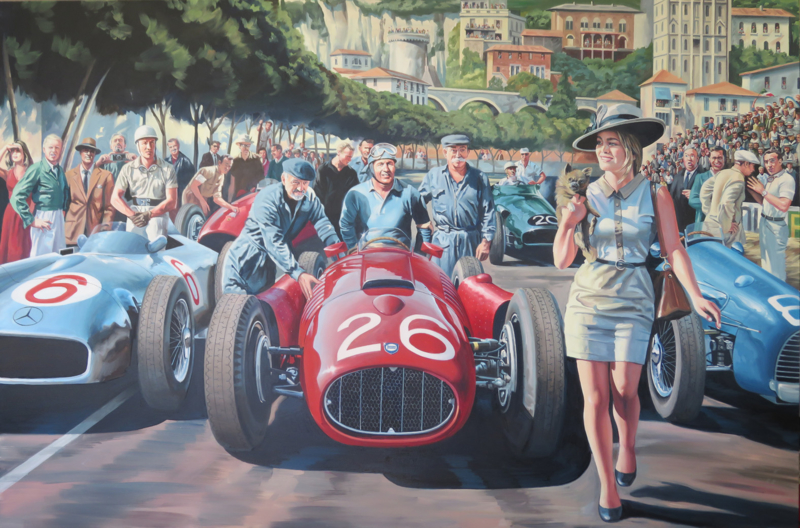 May 22, 1955. after the last qualifications, Ascari pulls himself out of his Lancia D50. suddenly, Grace Kelly appears between incredulous pilots and mechanics. the beautifull actress holds her little Chihuahua in her right arm. The poor animal, stressed by the noise of the engines, is exhausted ! Damiano en pietro, the faithful Ascari's mechanics are stunned : "it's unusual to see a movie star on the starting grid, eh Pietro !".
In the middle of the crowd, a bald little man scrutunizes the blond woman that will be one of his movie star. It's Alfred Hitchcock accompanied by Cary grant who is preparing his next thriller : "How to catch a thief".
On the right, eugenio Castelotti whispers to fangio that he is falling in love again. On the left you can spot Stirling Moss and mike Hawthorn who are good drivers but also well known philanderers !
The tittle of the painting is inspired by ascari's accident, when, losing control of his Lancia during the race, he dived with his car in the Harbour of monaco. rescued by a canoe, he claimed that he slept on a puddle of oil. But the truth is that Alberto had his head elsewhere !

Signed an numbered by the artist.